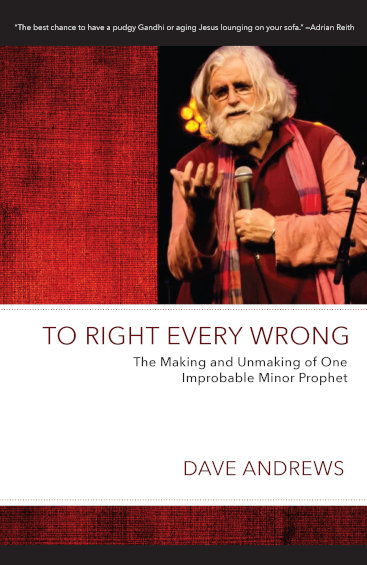 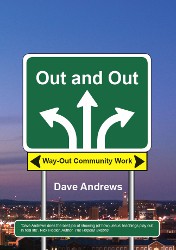 Out and Out - Way-Out Community Work

Out And Out has been written in response to the questions that Dave Andrews, the radical Christian community worker, has been asked again and again by Christian community workers all over the world. And the answers that he shares with us in this book have been forged and tested in the fire of his own personal, vocational and professional experience as a grass roots community worker. Out And Out is an attempt to explore what he calls 'Christian Mystic Community Work', that inspires, shapes and sustains the Waiters Union, an inner city community network, which is 'way out' in terms of its inclusiveness of 'up and outs' and 'down and outs'. Out And Out concludes with a beautiful reflection by Dave's wife, Ange, on the legacy of hospitality Dave and Ange have tried to pass on to their children and their children's children.

‘Dave Andrews has been and continues to be a major inspiration for my life and work.’

‘We are now clearly in a post-Christian time, and a more postmodern culture. A cross-cultural missionary practice is now needed. The Waiters Union offers one of the very few effective, replicable, genuine, missional models of (the future) church in Australia.’

‘Dave Andrews and the Waiters Union helped me out a whole lot. Dave does the best job of showing the implications of Jesus' teachings in how they play out in real life. He showed me what a life could look like if you followed the teachings of the first century Jesus. What Dave embodied seemed to be a representation of what the idea of followers of Jesus, or a church, could look like if the church can be loosed from literalism and conservatism and embrace the radicalism of Jesus.’

'In line with Christianity being a way of life together, rather than just a system of beliefs, Dave Andrews outlines his response to the teaching and example of Jesus as he announced the kingdom of heaven being here and now. “Jesus … was not trying to change the regime but changing the system itself". He does not see an answer in a withdrawal from the world as in monasticism but recognises the mysticism which the monks embraced.

The kingdom is under girded with compassion and love, not through withdrawal from the world but in embracing the needy as a practical means of identifying with Jesus. He gives a host of examples both from his own experience and the record of others who demonstrate "solving of problems in a Christlike way". He borrows The Twelve Steps Approach from AA and makes reference to the effectiveness of grass roots movements, such as GROW and The Oxford Group, his own Waiters Union and many other offshoots with self help ideals.

He sees these as all being based on Christ's teaching of solidarity, subsidiarity and equality. These have been movements with "initiatives of change", frequently on an inter-faith basis. He holds the conviction that "Jesus is with people, whether people know it or not". He acknowledges that his approach is "considered liberal secular in origin, not evangelical, charismatic, pentecostal – the fastest growing forms of Christianity today". He advocates being "less Christian" and becoming "a Christlike community". While some enthusiasts may view him as "liberal"; others from a denominational background may consider him "radical". However as fellow followers of Jesus, his thoroughly documented proposals cannot be ignored. The book is well worth reading and reading again.

Dave Andrews has written Out and Out in response to the questions he's been asked by Christian community workers around the world. He lays out a vision for Christian mystic community work, the framework that inspires, shapes and sustains the Waiters Union innercity community network he founded in West End, Brisbane, in the early 90s.

Andrews is what I would describe as a down-to-earth lover of people with the capacity to challenge unhelpful thinking and practices, as well as present alternative ways to live.

In this book written for the Christian community, Andrews critiques both otherworldly spirituality and the growing popularity of what has been called the “Neo-Monastic” movement. What we can learn from the early monastics, Andrews suggests, is how they combined contemplation with practical action.

We can learn to be aware of the dynamics associated with power. We can allow space for solitude that empowers availability to God and provides a catalyst for community development. We can take lessons from Jesus in how we pray with people. We can witness in ways that do not seek to convert.

Andrews takes us into the origins of the Twelve Step Movement and Initiatives of Change (Moral Re-Armament). He points out that now more than ever we need movements that transcend religious tribalism, exploring some of the lessons he's learned in forming dialogue, prayer and action between Christians and Muslims since the September 2001 bombings.

The book finishes with a chapter by Ange Andrews, reflecting on her experiences of offering and receiving radical hospitality in India and Brisbane.

I found Out and Out challenging, inspiring, and a practical tool for rediscover-ing the Christian mystic in me.

Dave Andrews and his wife Ange have a revolutionary and refreshing approach to life and his new book, Out and Out, reflects that. When I first met Dave he said in the course of conversation that as a young man he had read the story in the Bible of the rich young ruler who asked Jesus what he should do and Jesus replied, 'Sell all you have and give the proceeds to the poor and then come and follow me.' Dave said that he had not learnt then the theology of how to re-interpret the Bible and took the passage literally and personally. So he and his wife sold their house and went for fifteen years to Afghanistan, Pakistan and India to serve in poor communities in often challenging environments.

In today's world millions of people are attracted to mass movements to change society and the world, some through political or public pressure, some by persuasion and strong advocacy and some by violence. In Out and Out, Andrews points to a better and more effective way, backed up by convincing evidence, both on a personal and international political level. Central to this, the author writes, is the building of community. He draws on his experience as a convinced Christian but not in a way that excludes or is irrelevant to people of other faiths or no faith. He gives a step by step account, vivid and down to earth, of how he and his wife set about building a community in Brisbane's West End on their return from Asia.

He writes, 'Most attempts to bring about change in society haven't come unstuck because the groups involved lacked the funds or the numbers. Most came unstuck because of power struggles that caused the groups to self-destruct. The people involved lacked the power to change themselves, let alone their society. Hence, Christ taught that the most important single issue in bringing about a change, was for groups to discover the power to be able to manage their affairs in a way that gave everyone a fair go.'

Andrews explores many of the world's initiatives in community building. On the international level he writes in detail on the role of Frank Buchman and others in Moral Re-Armament (now Initiatives of Change) in the reconciliation of France and Germany in the aftermath of the Second World War. He quotes from his friend Jeff Fountain, director of the Schuman Centre for European Studies, whose detailed research shows how Western Europe was refashioned in the immediate postwar years and the role MRA played in that. Fountain comments that Robert Schuman, French Foreign Minister at the time, wrote in the introduction to Remaking the World, Buchman's collected speeches, that statesmen had only been moderately successful in 'remaking the world' and went on, 'What Moral Re-Armament brought, however, was a philosophy of life applied in action.'

Andrews also writes about IofC's collaboration with Nigerian peacemakers Imam Ashafa and Pastor Wuye. These two men previously had violently fought against each other, became reconciled and helped reconcile their communities. Now IofC works with them to share their experience in trouble spots around the world. Andrews comments that 'some of the best answers to questions about how we can create peace in the midst of war are being forged in Africa.'

The Twelve Steps Movement, he writes, is a direct offshoot of Buchman's work in the prewar years in the United States. Alcoholics Anonymous now has 87,000 groups around the world and its approach is now being applied in many other areas of human need, such as in Gamblers Anonymous.

Whether building community or remaking the world grabs you or not Out and Out is a book to read. It is radical and challenging because it is not somebody's theory, theology or academic reflection, but is a story and an expression of convictions based on experience, sometimes of hard knocks and setbacks, but also of great advancement and joy for both people and nations.